wheel of the ultimate brave

Before writing anything else about this honour, I would like you to read the beautiful lyrics of the song “Shaan Teri Kabhi Kam Na Ho”, from the serial Param Vir Chakra telecasted in DD National during late 80s. 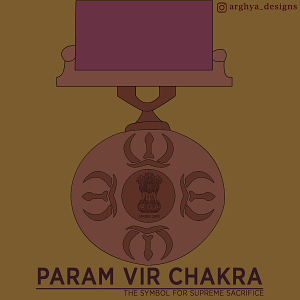 Hope the above lines has given you a strong reason enough for me writing this article.

My Respects to those mothers, wives, daughters and sisters who sacrificed their sons, husbands, fathers and brothers for the honour of the nation.

Param Vir Chakra, as the name suggests, The Wheel of the Ultimate Brave, is the highest military decoration during wartime in India. The medal is granted to someone for the most conspicuous bravery in front of the enemies. The medal was designed by Savitri Khanolkar. Till date we have 21 recipients of this honour, 20 awardees from the Indian Army and 1 from the Indian Airforce, with its first recipient, Major Somnath Sharma. After Param Vir Chakra(PVC), Maha Vir Chakra(MVC) and Vir Chakra(VrC) are second and third highest gallantry awards.

The history of modern day PVC dates back to the rule of the East India Company. Gold Medals were awarded for “Conduct and Courage on All Occasion”. Then Order of Merit(OM) was established by then Governor general, Lord William Bentnick. Later in 1902, the award was renamed as Indian Order of Merit(IOM). After this, Victoria Cross (VC), the highest gallantry of British Empire was brought into effect.

After Independence, it was decided to institute new Indian Awards, the Param Vir Chakra, the Maha Vir Chakra and the Vir Chakra. Nehru entrusted the implementation of the PVC to Major General Hira Lal Atal, the first Indian adjutant general of India. He in turn requested Savitri Khanolkar, the wife of an Indian Army officer, Vikram Khanolkar of the Sikh Regiment, to design the medal for the Param Vir Chakra.

Despite gaining independence from the British, India still remained a dominion of the United Kingdom. Hence, the then Governor General, Chakravarti Rajagopalachari suggested Nehru to announce the establishment of the awards on 26 January 1950, the day India becomes republic, but retroactive effect from 15 August 1947. 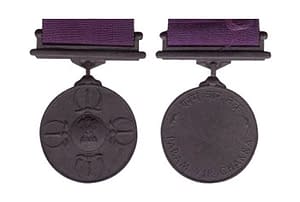 As the name suggests, the Wheel of the Ultimate Brave, the medal is circular in shape. Since it symbolises supreme sacrifice and valour, it is made of bronze. It is a circular disc of 1.375 inches diameter.

The front side of the medal has the National Emblem in its centre. It is surrounded by 4 Vajra, right angled to each other. Vajra, the weapon of Lord Indra (king of Gods), was made by the bones of Rishi Dadhichi, who sacrificed himself for the victory of Gods over the demons.

The back side of the medal has a plain centre. Around the plain centre, are “Param Vir Chakra” written in English and Hindi separated by two lotuses. A purple ribbon of 32 mm long holds the medal.

There are 21 awardees of the Param Vir Chakra. The Names are listed as:

At the end I will like to mention that we as responsible citizens should always be obliged to everyone who has sacrificed their life, comfort and their family. I read somewhere that, ‘A soldier not only fights just because he hates the enemy, but he loves them more whom he has left behind’. As a soldier steps forward to a war, he always has one thought “Aao hum hunar aazmate hai, tum teer aur talvaar aazmana, hum jigar aazmate hain.”

Let me end the discussion with a famous quote of Captain Vikram Batra, PVC(P):

“Either I will come back after hoisting the Tricolour or come back wrapped in it.”