During these tough times in the Indo China borders, on the Line of Actual Control, let us fill ourselves with the heroics of the battle heroes in the past times of Indian war history. I hope readers’ shall feel the patriotism of those battle heroes and get motivated with the same.

Major Somnath Sharma, the first Param Vir Chakra awardee, was an Indian Army officer. He was an officer of the Kumaon Regiment in the Indian Army. He started his military career in the 19 Hyderabad Regiment in British Indian Army in 1942.

Let us give a look into his life. His efficiency in warfare, his heroics in the battle field and many more. 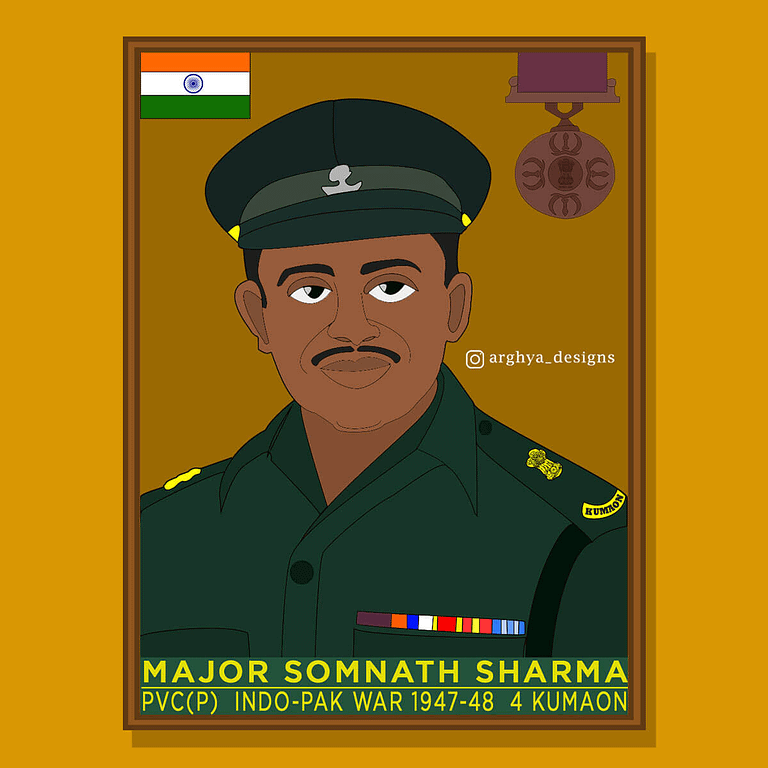 Somnath Sharma was born to Lt Gen Amar Nath Sharma on 31st January 1942. He belonged to a place named Dadh, somewhere in Himachal Pradesh. His childhood days mostly spent with his grandfather. He was inspired by the slokas of Bhagwat Geeta, narrated by his grandfather.

He was a good student in his student life. He completed his education from Sherwood College, Nainital. He was inspired by his father, who was also an officer in the British Indian Army.

He always dreamt for being a great army officer like his father, and time conspired to make him so.

Major Somnath Sharma started his career in the 8th battalion of the 19 Hyderabad Regiment as a 2nd Lieutenant in the British Indian Army.

He fought for the British in the second world war against the Japanese in Burma during the Arakan campaign. His extraordinary warfare skills made it possible to get a mention in dispatches (nominated for gallantry award) in the time when the British ruled the country.

Post-independence, he was shifted to 4th battalion of the Kumaon Regiment in the Indian Army. This was where he proved his excellence. He made his supreme sacrifice serving the regiment and added a gem to the glory of the regiment.

The incident dates back to October 1947, when the Indian troops were sent to Kashmir Valley to fight the Kawalis. These Kawalis had intruded Kashmir and tortured the civilians. These people were killing the young and the old, raping women, torturing the kids and had crossed every level of maltreatments.

On 27th October 1947, the Indian Army was sent to shoo these Kawalis from Kashmir Valley. Major Somnath Sharma’s delta company of 4 Kumaon was airlifted to Srinagar on 31st October.

Those days, Maj Sharma suffered a hand fracture injury in the hockey fields. Initially his commanding officer did not allow him to be a part of the infantry. But due to pressures from Maj Sharma, he was forced to allow him to go for the war with his men.

On 3rd November 1947, three companies were deployed for patrolling duties in the Badgam valley. Seeing no enemy movement, two parties were called back.

But, time had a different conspiracy. It conspired to honour the soldiers with their utmost desire. As a soldier, one always desires to fight for the nation. He even feels more honoured sacrificing his life and ploughing the feet of the Nation with his own blood.

Around 2:35 PM; Major Sharma’s D company suddenly faced an attack from the local residential buildings. The Kawalis have been hiding there for an opportunity to fire upon the Indian soldiers. As the 2 companies went away, they started firing on Maj Sharma’s company.

Major Sharma, being so responsible didn’t open fire until the Kawalis were out of the houses since it could injure the locals and the innocents. This is the morale that the Indian Army upholds even on a battlefield. Indian Army not only wins war just because it is a strong Army, but it is also a Morale Army.

Soon the company was surrounded by enemies from 3 sides. Major Sharma ordered to open fire. The company suffered a heavy loss from enemies’ mortar fire. Sharma realized the importance of holding the position, as both the city and airport were vulnerable if it’s lost.

Though heavily outnumbered; Maj Sharma and company kept on fighting with thousands of enemies. He often exposed himself to the enemies’ fire, running from one post to another supplying ammunition and motivation to his men. He took upon ammunition distribution when the assigned soldier sacrificed himself fighting the battle.

Major Sharma operated the Light Machine Gun (LMG) and kept of washing off the enemies. While busy fighting, a mortar shell exploded on the pile of ammunition near him. He suffered heavy injuries and succumbed to death. He made his supreme sacrifice for the motherland.

His last message to his commanding officer remained immortal till now:  “The enemies are only 50 yards from us. We are heavily outnumbered. We are under devastating fire. I shall not withdraw an inch but will fight till our last man and last round.” 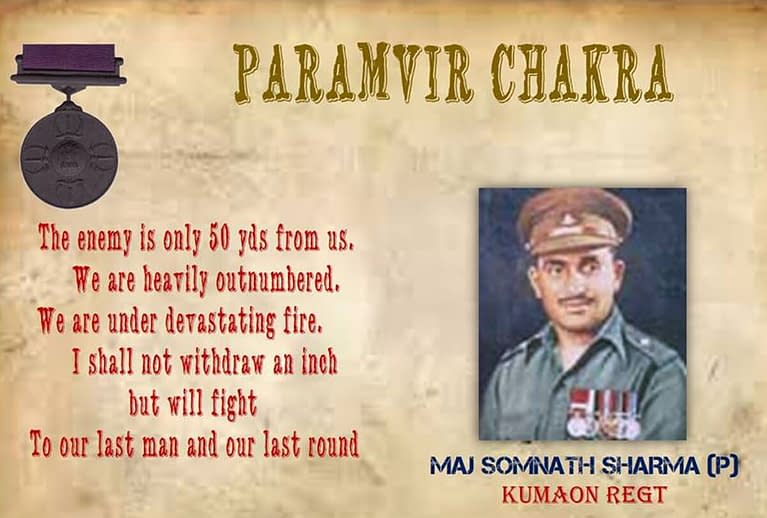 By the time a relief company arrived, everything had ended. The post held by Major Sharma was secured. The Kawalis suffered heavy losses. Major Sharma, along with 1 JCO and 20 Other Rank soldiers were martyred. His body was found after 3 days. Though heavily disfigured, his body was identified through the leather holster of his pistol and Bhagwat Geeta in his pocket.

First Brave Heart to be Honoured with PVC

On 21st June 1950; Major Somnath Sharma was decorated with the highest gallantry, the Param Vir Chakra, for his Supreme Sacrifice in the field of action. He became the first Indian to be decorated with this honour.

Wars itself is the last and violent option for settlement. It has never been beneficial for the nations. War costs heavy number of lives and economy which can never be recovered.

We shall always look upon to our soldiers with a feeling of respect and honour. It is only them who get the golden opportunity to serve the nation as the first line of defence. They are the only one who had enough courage to sacrifice the worldly pleasures and devote them to the service of the motherland.

A soldier always has the Tricolour shroud (kafan) tied to his head, every time he goes for an operation. These brave hearts enjoy ploughing the feet of the motherland with their blood. This sacrifice is incomparable.

As responsible citizens of the country, we should never forget the sacrifices by our saviours. It is not only the ones who are decorated, every soldier must be respected. We must ensure peace within the borders so that they can serve well on the borders. It is our responsibility to prevent disputes among various religious groups and maintain peace within the nation.

It is sad that people keep talking about their rights and forget their duties. We as responsible youth of the nation should try to bring a revolution in this mindset of the population. I would like to end the discussion with a quote.

Please put your feedback in the Comments. Jai Hind!