Lord Vishnu, as the name suggests, is the one who is everything and inside everything, is the “preserver” in the Hindu Triad known as the Trimurti. It will be more significant for the readers’ if the physical appearance of the lord is described first. 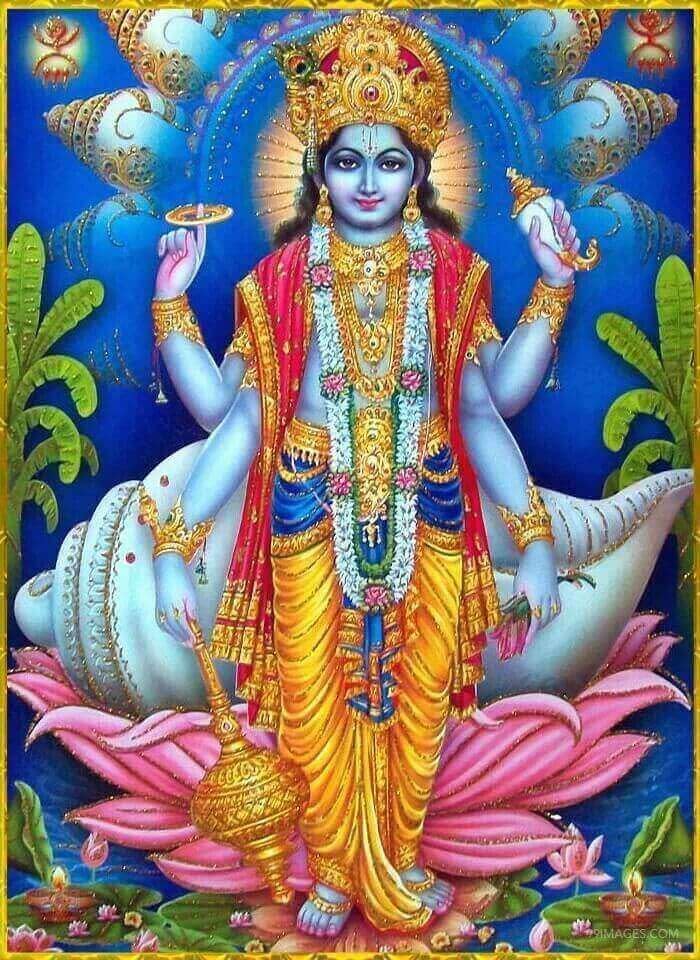 Verse 10-11 of Chapter 11(The Universal Form) of the Bhagwat Geeta reads: 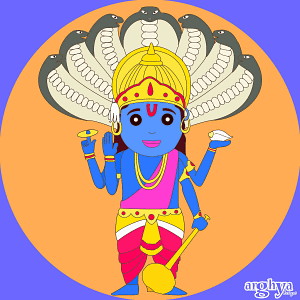 Meaning: Arjuna saw in that universal form unlimited mouths and unlimited eyes. It was all wondrous. The form was decorated with divine, dazzling ornaments and arrayed in many garbs. He was garlanded gloriously, and there were many scents smeared over His body. All was magnificent, all-expanding, unlimited. This was seen by Arjuna.

The above slokas tell us that it is impossible to define the physical appearance of the Lord’s dimensionless structure. But there is beautiful Chaturbhuji Roop of Him described in the scriptures.

He is depicted as blue skinned, resting on the lap of Sesha Naga with his four arms holding his major weapons, the Sudarshan Chakra, the Kaumodki Gada, a Sankh, and a lotus.

He resides in the Vaikuntha, a place even beautiful than the heaven, surrounded by the oceans of milk, also known as the Chir Sagar along with His wife Mata Laxmi, the Goddess of fortune.

According to the Vishnu Puran, the creator Brahma also emerged from the naval of Lord Vishnu when He decided to create life. Lord Shiva is also a form of Him according to the scriptures. It is also said that every atom of the creation is a part of him. As Krishna says in Bhagwat Geeta in Chapter 9, Verse 17:

Meaning: Krishna says,”I am the father of this universe, the mother, the support, and the grandsire. I am the object of knowledge, the purifier and the syllable om. I am also the Rig, the Sama, and the Yajur (Vedas)”.

Whenever, there is a discussion of Lord Vishnu, there must be the discussion of His leela avatars on the Earth. As we know, Lord Vishnu is the “preserver” of the ‘Order of Duty (Righteousness)’ or ‘Dharma’. He descends on the Earth time to time for the sake of preserving dharma. Lord Krishna in Chapter 4, Verse 7, of the Bhagwat Geeta, says:

Meaning: Whenever there is a growth of evilness and erosion of righteousness in the society, Lord Vishnu descends on the earth time and again.

Now, it is questionable that why does He even needs to descend Himself. This question is also answered in the next sloka of Chapter 4 (Verse 8)  of the Bhagwat Geeta. It reads:

Meaning: Lord Krishna in this sloka tells, he has mainly 3 jobs to do for every time he descends:

Every time Lord Vishnu descended on the Earth, his avatar has done something impactful. The Bhagwat Mahapuran says that the Lord descended 23 times as of now, with 1 being left the Kalki Avatar. Therefore he has a total of 24 avatars.  Out of the 24 avatars, 10 are significant. These are collectively known as the Dashavtaras.

Lord Vishnu’s 24 avatar katha is one of the most beautiful contexts of Him. Scriptures says chanting of his avatar leela leads to salvation from this life. Since it is not possible to describe His avatar katha elaborately in a single article, I decided to brief about them. This avatar katha  is also mentioned in Skandh-2, Chapter 7 of the Bhagwat Mahapuran, where Lord Brahma  describes the avatar katha of the Lord to Narad ji, the celestial sage.

Although I keep on writing pages about the Lord, it will fall short. His glory is infinite. Every one of us is a part of him and so as responsible children we should devote ourselves to the Lord. This devotion will make us free from all the ignorance, purify our soul and bring us to light. In the Chapter 18 (Verse 66) of the Bhagwat Geeta, Shri Krishna says:

Meaning: Abandon all varieties of religion and just surrender unto Me. I shall deliver you from all sinful reaction. Do not fear.

I would like to end the discussion here. I hope you have liked the blog. Feel free to let me know your questions on the topic in the comments section. Please put your feedback in the Comments.